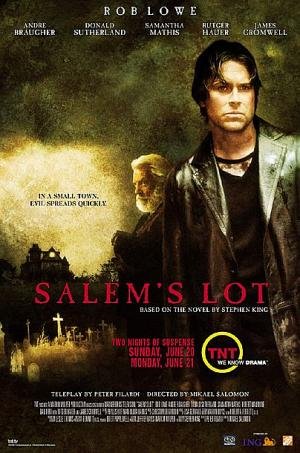 Emmy says:
A much truer adaption of the book than the 1976 film, but sorely lacking interest in Part 1. The characters are not very likeable and there is a dearth of ‘real’ conversations. I find myself not actually caring how this movie gets around to it’s version of the prologue as it is significantly different to the book. Part 2 is definitely the better half, I found myself enjoying the conversations between the characters and the unique death of vampires (hitting the ceiling and dissipating into ash). Unfortunately the lack of empathy generated by the characters leaves this feeling like a daytime movie that happens to feature vampires and does not instil any sense of fear into the viewer. Fun, but not horror, in my opinion. 7/10  (I gave the 1979 version 6/10).

Jeff says:
To be upfront, I think I wanted to see this more because it was filmed in a town we know rather than for the story. Even though it was updated to modern times (they have mobile phones!), it still had an old-fashioned quality about it. Liberties were taken from the book (but different ones to the first version), although Barlow was done more faithfully this time (even though there’s a story about Rutger Hauer not learning his lines and wanting to ad-lib). The characters were strange. After the first half, I didn’t like anyone and cared more about getting to the end than what happened. However, the second half was much more enjoyable and had some actually good moments. Still not much of a horror story apart from having vampires, but it was enjoyable enough and certainly not bad for a Stephen King adaptation. 7/10 (I gave the 1979 version 5/10).